Our very first version of ProMods began as an expansion into the northern regions of Europe. Now, 6 years later, it’s time for the younger brother of ETS2 to get the same treatment. Therefore we are excited to officially announce our next major project:
PROMODS ATS – CANADA
You may have already seen a certain video we posted on our YouTube channel a few weeks ago. Since this video was released on April 1st, quite some people doubted its legitimacy. We would like to confirm that this project is indeed real!
With the Washington DLC by SCS on its way, we are excited to expand the map further north. The first stage of the mod will include a part of the province of British Columbia, with cities like Vancouver, Kamloops, and Kelowna. Our goal is to consistently expand throughout the vast and beautiful regions of Canada, although this is a very long-term process.
Below we have a map showing what is planned for the initial release. We still have a lot of work to do, so we will not announce any release dates for now, but we will keep you updated on our progress. 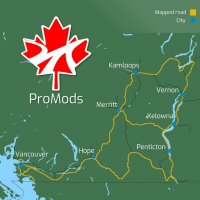 If you would like to keep up to date on developments, we now have a Development thread on our forum . We have already been working on the project for a few months, so we have some screenshots to show already. Do you recognise any areas? As always, areas shown are W.I.P. and may not be finalised. Enjoy!

The Rescale of ETS 2 & ATS
...
Project Quebec v1.0 (v1.6.x)
...
Project West Map v 1.3.2 [1.6.x]
Hi, I'm stoked_dude and I have started a project of rebuilding existing roads and building entire new ones in the states of California, Nevada and Arizona. I started with this project in early January 2017 and in the beginning, my ambition with this project was to "refresh" the...
ATMX Map Addon Alpha v0.1 by Alta Tension MX (1.33.x)
...
Latest Comments