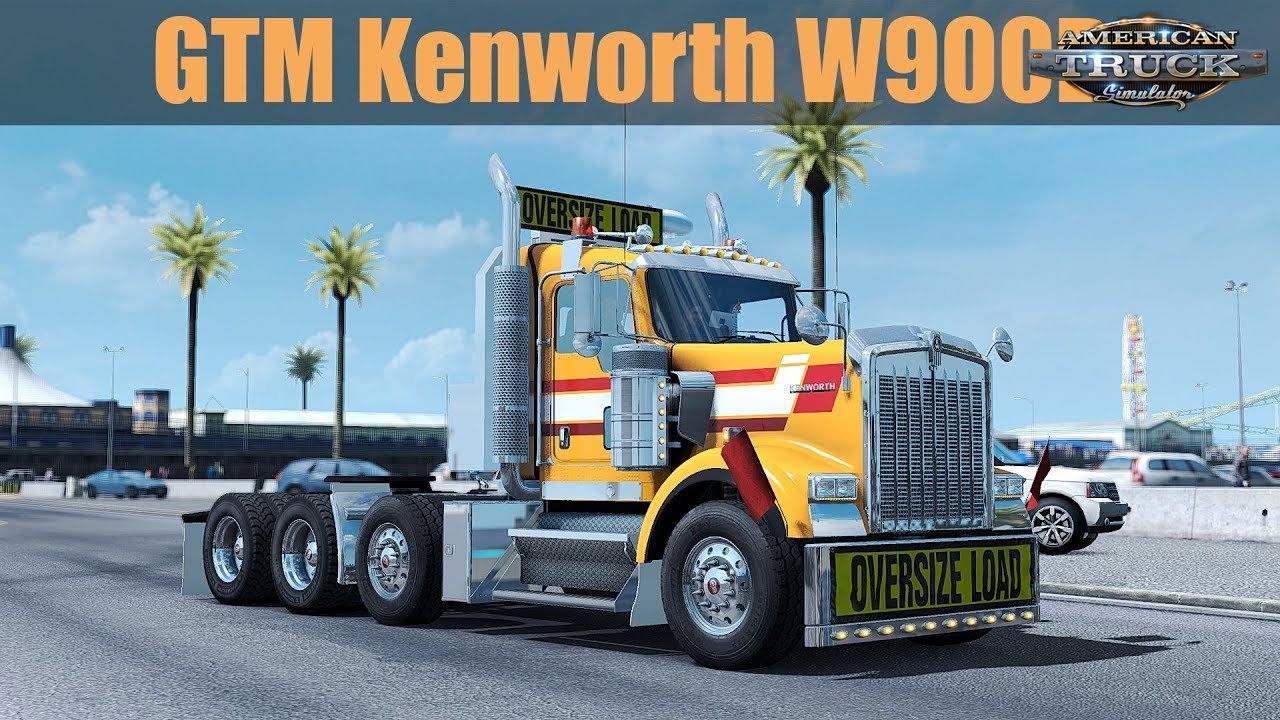 Download mod truck Kenworth W900B + Interior v1.0 by GTM Team (1.35.x) for ATS | American Truck Simulator game.
During 1982, Kenworth introduced the W900B as a replacement for the W900A.
While largely distinguished by its introduction of rectangular headlamps, the W900B underwent further modification.
To further accommodate increased engine cooling, the hoodline was raised, requiring the cab to be mounted higher on the frame.

Since the introduction of the W900B, Kenworth has introduced two variants of the W900.
In 1987, the W900S was introduced, adopting the sloped hood of the T800.
In 1989, the W900L was introduced as a longer version, extending the BBC from 120 to 130 inches.
Initially produced as a limited edition (to commemorate a W900's appearance in Licence to Kill),
the W900L went from becoming a limited edition to a full production vehicle.
W900B then took the place of "the workhorse". Shorter wheelbase and overall bigger grill allowing for
more efficient engine cooling allow the B model to fit into more diverse scenarios.
Features truck:
- independent truck model
- High quality 3D model
- High quality detailed exterior
- High quality detailed interior
- passangers seats
- the model has own wheels
- the model has own sound
- the model has own interior
- present the illumination of arrow speedometer and tachometer
- animation parts on interior
- the character is correctly sitting in the driver's seat
- the choice of wheels configuration
- the choice of color body / metallic paint / skins
- the choice of transmission, gearbox
- the choice of power engine
- correct position of the Kenworth logo
- The correct position of the player
- Working headlights, brake lights, tail lights, front and rear turn signals, steering wheel and reverse signals
- Tuning and accesories present
– interior accesories configuration
- Supports all major functions of the game
- Supports Cables trailer
- buy from Kenworth dealer
Update for 1.35.x:
- Update for 1.35.x game version
- Compatible with its own car dealership for mods
- Changed the file format according to the latest patch

Note from the author
Note from the Author:Yes I am aware it looks very similar to the SCS W900 - it's heavilly based on it.
(technically - just like in real life it's almost the same truck)


What's the differrence? The differrence is the hood shape. It's overall shorter and bulkier (wider+higher).
So the truck is more manouverable, but at the same time slightly more challenging to drive due to reduced visibility.
Also I've added a few minor details here and there to make the model look abit more realistic.
We also plan to revisit engines and transmissions for a more realistic feel.


It's a clone of SCS truck - what's the point?Well, first of all we wanted to give you guys a new truck, yes it's very similar to SCS one,
but it gives us our own W900 truch which we can freely modify with new stuff
(like more cabs or chassis variants) without affecting SCS truck.
Not to mention I personally think that a "workhorse" W900B will be alot more
fitting for the upcomming ST dlc than the "showtoy" W900L SCS gave us.


What's icluded in the mod?The mod contains the truck (duh) and all the appropriate tuning for it which
is identical to the SCS W900 with a few more custom parts.