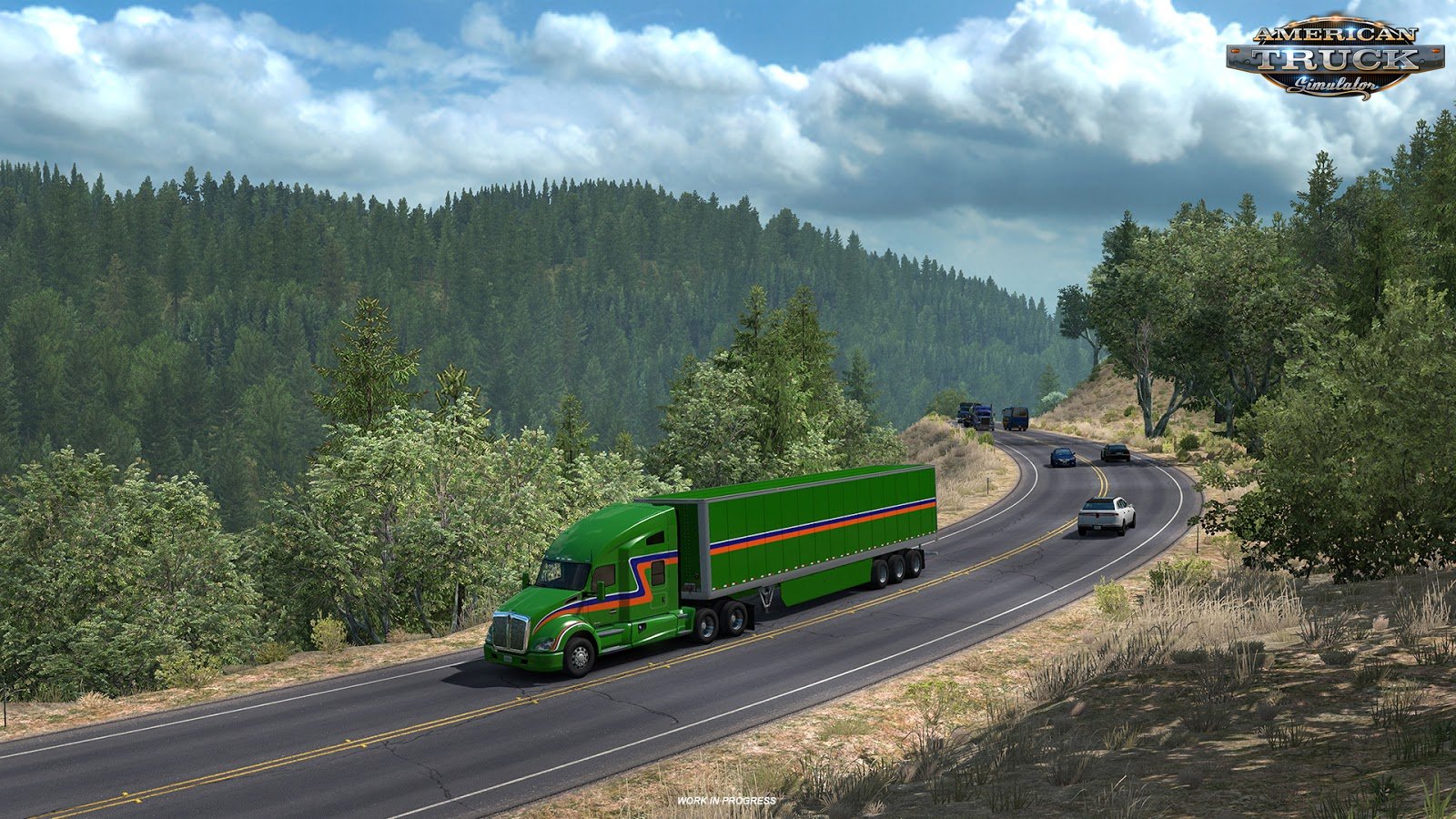 Today we'd like to present another appetizer for the approaching 1.35 update. Players of both American Truck Simulator and Euro Truck Simulator 2 can look forward to some (a lot, actually) new tarmac!
Let's start in America. The newly-added OR-58 will connect the cities of Eugene and Bend, and there's much to look at! For some distance, this road tracks the Salt Creek river, which will lead you to the Odell Lake. There, far behind it in the shroud of fog, you'll see the majestic Diamond peak, the highest mountain in the region, while on the other side lies the Willamette Pass Ski-Resort area. Pity there's no time to lose when one's working, right?
Next comes the final part of the well-known and liked OR-140; you'll finally be able to drive all the way from Medford to Winnemucca! Starting in Klamath Falls, you'll probably notice that the city centre has been remade and enlarged. The new road will take you past the great Upper Klamath Lake then and through the deep woods of Fremont-Winema National Forest farther to Medford, Nevada.
Last but not least, there's the CA-299 offering the option of driving from Redding directly to Canby while passing through the small town of Burney along the way. It's a pretty long drive, which has it all - farmlands, meander climbs, junctions, landmarks, mountains canyons, gorges... you name it!
In addition to the new roads, there are various changes and additions. With the CA-299, Redding has received an extension around the junction between Interstate 5 and CA-299; a new garage and a truck dealer. Farmington (New Mexico) has also gotten a new garage, while Yuma has had 3 new additions; a new garage, a truck dealer and a brand new truck stop.
And there's one more considerable improvement - we keep working hard on improving our road signs to make them more realistic. If you like to navigate the world "the old way" - just turn off the GPS and watch the signs along the road closely - you should have a much easier time in more regions. The sign system in Arizona, along with several truck stops and the US-95 in California, has received a complete overhaul - so old-school trucking should feel way more natural from now on.
Finally, let's look at the old continent! New additions here are part of our continuous effort to improve the vast road network that Europe already has. Let us mention here two new rural roads in France -  one for the Vive la France! map expansion, and one for the base game. The first one connects highways A10 and A6, where you can find the beautiful city of Montargis near-by; the second road connects A6 with the N44. Since the rural roads in France have proven to be very popular, we hope you'll like these too.
Not enough you say? Absolutely right! The revelations are far from over, as some region(s) have yet to be unveiled at all! Remember to check our blog and socialmedia, as more info will be coming soon.

Tioga Pass in ATS
From time to time, we like to revisit a region already covered in our games, and change things around, or add a new route. You can look forward to such retouches appearing especially in Europe later this year ;). For today, we would like to show you a new route that we are...
MHAPro map 1.5 for ATS v.1.5.x
ChangeLog: 1. Overlook places (look pictures in RAR document) 2. Jackpot city - overlook     - company mha_constr     - company roadwork_mha 3. new look road 93     - new gas station 4. Wells city - back from my old map       -...
MHAPro Map ATS v1.33.x
...
MHAPro Map 1.29. for Ats
MHAPro Map 1.29. for Ats 1.29.x game version and DLC New Mexico This is a free version! You must know that Free version is like kind of Demo version , so if you want enjoy in whole map MOD you must download Support version . This version works just with ALL big map DLCs ... and...
Latest Comments